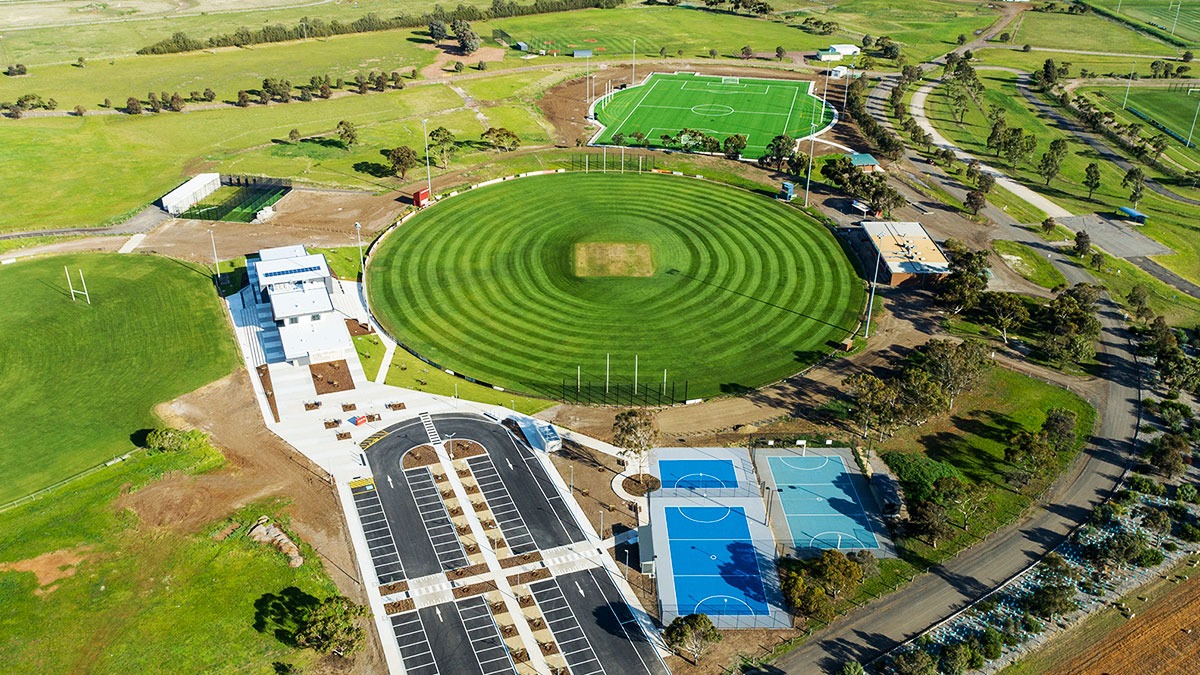 Victoria’s new $13.3 million facility at MacPherson Park in Melton has been announced as a joint winner of the prestigious National Project of the Year as part of the AFL’s 2020 Ken Gannon Community Football Facilities Awards.

The Melton project, which features a new multipurpose pavilion, eight flexible accessible change rooms for both football and netball, a synthetic multipurpose oval and umpire rooms, shared the headline award with a redevelopment in Moreton Bay, Queensland.

The annual awards recognise best practise in community football facility development across Australia, along with the people, clubs and other stakeholders driving the best projects.

The AFL is currently involved in 200 facilities projects in development or under way across the country at all levels of the game, from elite through to grassroots. This includes 57 projects in Victoria. The scale of facilities development benefiting football is unprecedented and is due to the growth of the game nationally, particularly in female football.

“With participation growth, and the ongoing surge in the popularity of football for women and girls, the planning and development of fit-for-purpose infrastructure plays a vital role in ensuring the game can continue to cater for everyone who wants to be involved.

“We need significant support from all levels of government to make projects like these happen, and both the Moreton Bay and Melton projects are shining examples of what can be achieved when stakeholders across government, local communities and the AFL come together for the benefit of people and communities who will use these magnificent facilities.”

Head of AFL Victoria, Brad Scott, said: “I would like to congratulate everyone involved in this outstanding project, including the Victorian Government, Melton City Council, the AFL, local community representatives and contractors.

“The collaborative approach to delivering the MacPherson Park project from all involved has seen a fantastic facility created to benefit the local community and helps to ensure our game can continue to grow.

Ken Gannon had a decorated career across many areas of the game, including as Chief Executive of the Geelong Cats and AFL Victoria. Ken spent much of the last decade of his career developing the AFL’s interest and partnerships in the community facilities space, leading outcomes related to more than 800 community football facility projects in that period.

To view case studies of the winning projects, click here.

The Ken Gannon Community Football Facilities Awards recognise best-practice facility development across the country. The awards are assessed by looking at the impact a project has consistent with the AFL’s aim of providing well positioned, welcoming, fit-for-purpose football facilities that support our growing game’s strategic priorities.

AFL state and territory bodies identify their best community football facilities project of that year according to that criteria, which then places that project in the running for the National Award, pending assessment by the AFL National Facilities Panel in conjunction with Ken Gannon.

State winners are selected annually, before the national winner is announced. State winners in 2020 (with total project cost):