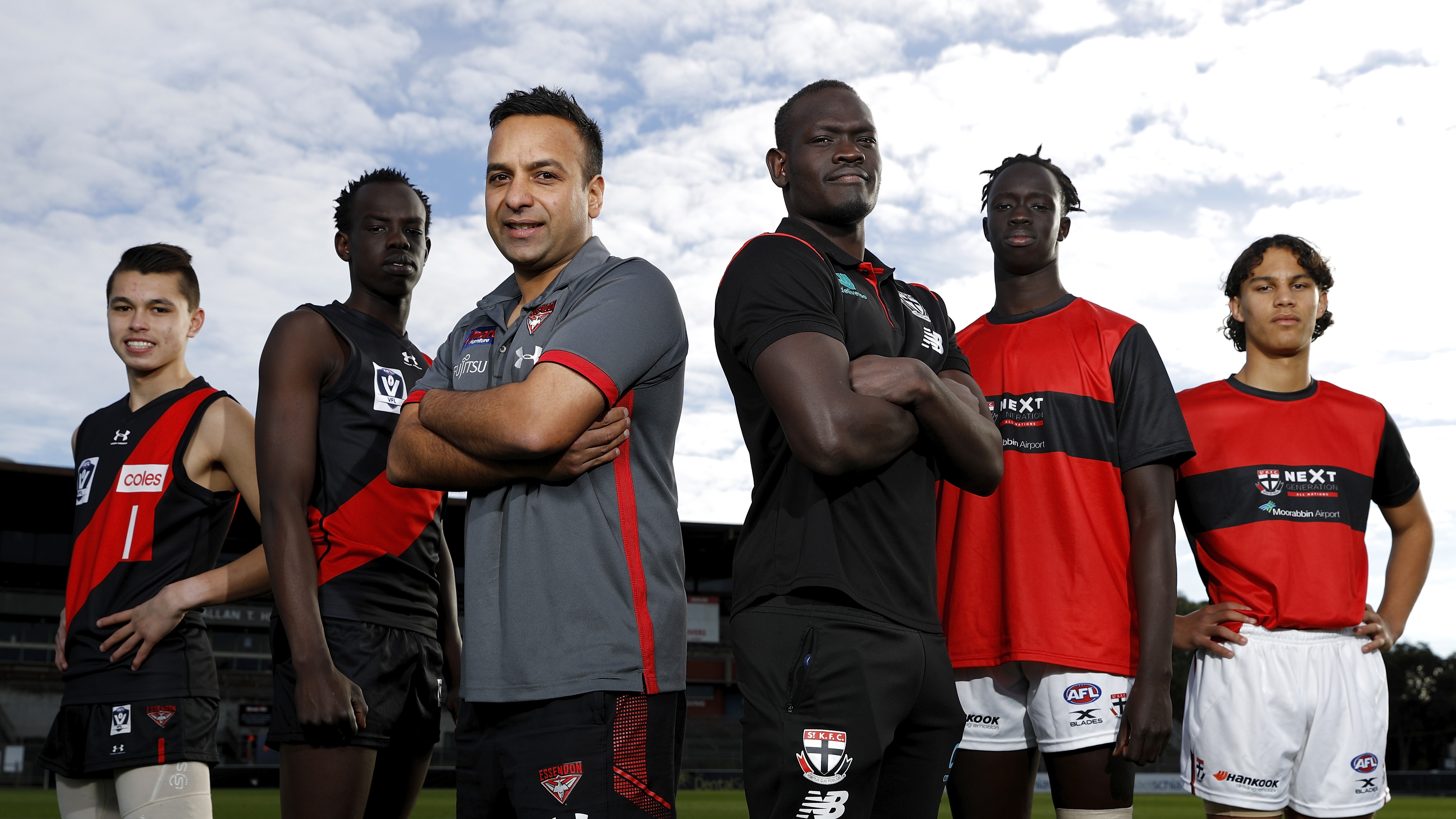 Head Coaches, Goy Lok and Harmit Singh with players at the AFL Next Generation Academy match between the Essendon Bombers and the St Kilda Saints at Windy Hill on July 7, 2021

Lok’s pathway to a VFL career has been anything but conventional.

From modest beginnings, to holding influential leadership positions both on and off the field, the Zebras vice-captain is shaped by his upbringing and extensive life experience.

Having migrated to Australia from Ethiopia at a young age, Lok is passionate about promoting Australian Rules football to a culturally diverse cohort of grassroots footballers.

“I was lucky enough to come to Australia in 2005 as a six-year-old and migrated to Melbourne in the heart of football,” he said.

“Throughout primary school I was introduced to the game and fell in love with it straight away, participating in school sport as well as Auskick.”

Lok’s football journey began in earnest in year eight when a teacher helped him find a junior club in his local area, kickstarting a burgeoning career which led to his involvement in the Sandringham Dragons TAC Cup program, followed by VFL gigs with Casey and Frankston and eventually a Zebras list spot at the end of 2019.

He says he wasn’t playing community football at the start of high school as he “wasn’t aware of how to get there”, but that quickly changed, and now Lok is using his experience of playing community sport to inspire the next generation to chase their football dreams.

“My role at the moment with St Kilda is introducing new audiences to the game, whether that’s playing, umpiring or becoming a supporter,” he said.

Prior to starting at St Kilda, Lok gained extensive work experience in a part-time diversity role for AFL Victoria which led to him accepting a position at the Saints a few years later.

“I was doing part-time and casual work with AFL Victoria, focusing on diversity and engagement throughout the south-eastern suburbs and the majority of Greater Dandenong,” he said.

“I got to know the guys at the St Kilda footy club very well and worked closely with their community groups and a lot of the programs in the South East.”

“The club was able to create a role from the perspective of diversity and asked if I wanted to do it full-time, so I took the job and have been lucky enough to be there for the last two or three years working closely with multicultural schools and community groups to introduce them to the game.”

According to Lok, there’s several barriers to participation and engagement in community football, but he and St Kilda are trying to “make the game accessible for every single person.”

He says it depends on where people are from and their past experiences, and that understanding the fundamentals of the game is a frequent barrier he encounters.

“Another one is getting transport to sport, which is massive in the communities we deal with,” he said.

“It’s about recognising the particular barriers and breaking them down.”

Lok is a man with many strings to his bow and has also been involved with St Kilda’s Next Generation Academy Diversity Squad.

The NGA squad has a distinct Sandringham flavour with Zebras assistant Trent Dennis-Lane as senior coach, and Lok says it’s a rewarding experience helping up and coming footballers find their feet.

“I thoroughly enjoy seeing people develop through the programs and initiatives we have at this club,” he said.

“I was fortunate enough myself to go through the same pathway, so to see it and to give someone else that same experience is amazing.”

He was named by the AFL as one of just two VFL multicultural ambassadors for the 2020 season, a position that reinforced his status as an emerging leader and a role model for footballers of diverse backgrounds. 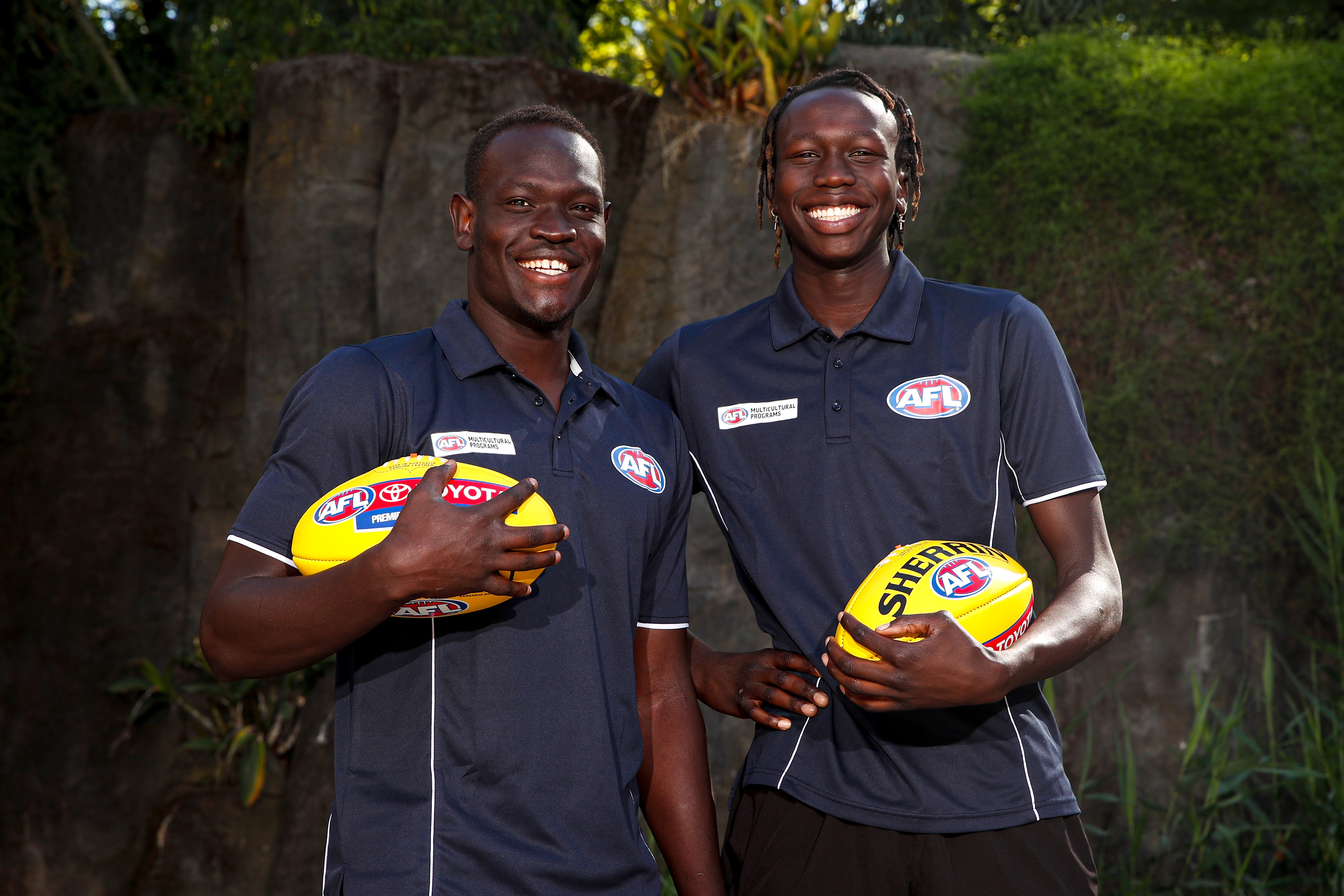 “It meant a lot to be a part of that and I was very honoured and privileged to be amongst very talented people in the industry,” he said.

“It’s a nice feeling when we speak to young people in the community and knowing they look up to what we do.”

When asked about the most rewarding aspect of his job, Lok said: “It’s all about watching someone fall in love with the game.”

“Once you meet someone who has no idea about AFL football and they grasp the same feelings you did, then it’s rewarding and wonderful to watch as these people take their own journey in the football world.”

Moving forward to the 2022 VFL season, Lok is excited to continue pre-season training as the Zebras gear up for another exciting year.

“I’m very, very excited for what my football journey has to offer next year,” he said.